Well not really, he didn’t loose his head but he lost a Lego head.  Let me set the story….

My family is always asking for gift ideas for the kids so I told Unc (Papi) how about gift cards to Barnes & Noble?  It is not a ‘toy’ and the kids can pick out books. So last Friday during Holiday break, I took the kids to Barnes & Noble as their outing for the day.  I gave the kids their limit and they had to go around and find books within that price range.  I, of course, stayed with Riley to keep him on task as he ‘headed’ straight to the Lego area as he loves his Bionicle ‘guys’ as he calls them.  He has many of these sets.  After they are put together they stay together for about a week and then it’s game over as he takes them apart and starts interchanging them with other Lego Bionicle parts.  I must say he has gotten very creative with creating his ‘guys’.  As you can see, Riley was very indecisive as to which one to get.

The next day, we took the kids to see a movie – Spider Man into the spider verse – great movie by the way – and Riley brought his new Elite Tie Fighter Bionicle with him.  Now, if you know Riley he HAS to take something with him everywhere he goes, like everywhere….  the bus, school, restaurants, bathroom, etc.   Sometimes it is random stuff in a Ziploc, but he has to  have something. On this outing he took the new ‘guy’ and sat him right next to him on his seat.  We headed straight home after the movie and as we were getting out of the car Riley kept pointing to his head.  It probably rolled under the seat in the car so he checked.  No head 😦  we all searched and still… no head 😦  I called the movie theatre and talked to a manager as Riley could not be consoled.  The manager said another movie was in that theatre. He would check after and call me either way.  He never called, so me being persistent, I called back again and talked to another manager.  He said he would check.  If he found it he would call me, if he didn’t, he would not call me.  Guess what? He never called ;(  Riley calmed down but let me tell you every 10 minutes he was pointing to his head.

The next day my friend Carly came over.  Riley showed her his new ‘headless’ guy and kept pointing to his head.  I told Carly what happened and she suggested I email Lego directly and see if they can send another one.  Great idea!  So I emailed them Sunday night and this is what I sent:

Riley sat next to me as I sent the email on Lego’s website.  I explained to him what I was doing but he still kept asking me and pointing toward his head.  I told him we needed to be patient and we should hear back soon,  but in case we don’t it will be ok buddy, mom promises you, it will be ok.   His birthday is coming up next month so other Bionicle sets can be purchased.

Wednesday afternoon I received an email from the Lego company 🙂  Their response: 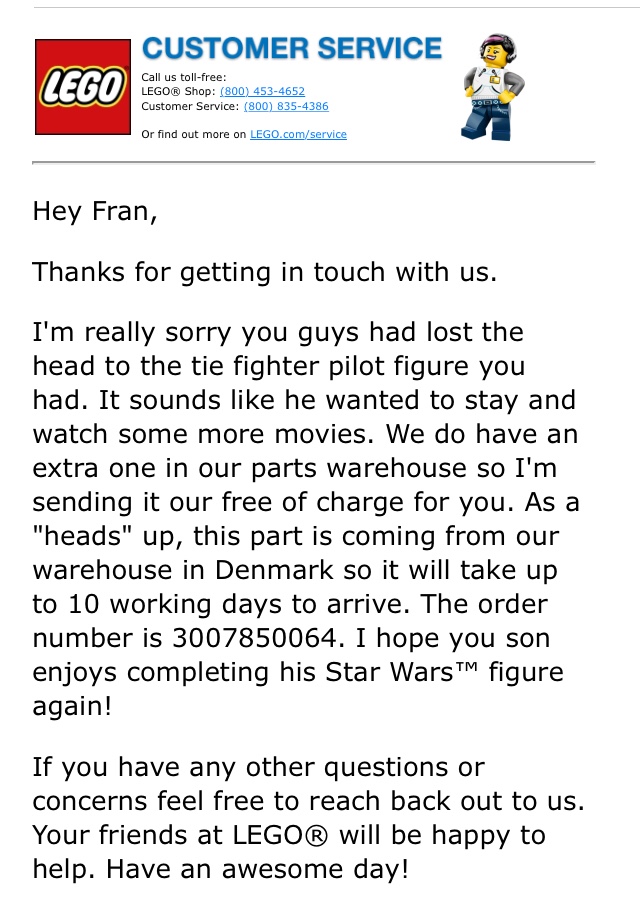 Seriously?!!   Lego – you are amazing!  I am so grateful!  My kids have played with your sets since they were babies and still enjoy them to this day, especially Riley!

I love that this was NOT an automated response and how genuine and caring they were for Riley and the situation.

I couldn’t wait for Riley to come home yesterday and give him the good news!  He has been dancing around, smiling, laughing and pointing to his ‘head’ every chance he gets.

From the bottom of my heart, Thank you to the Lego company for making Riley’s day!

There was an error retrieving images from Instagram. An attempt will be remade in a few minutes.